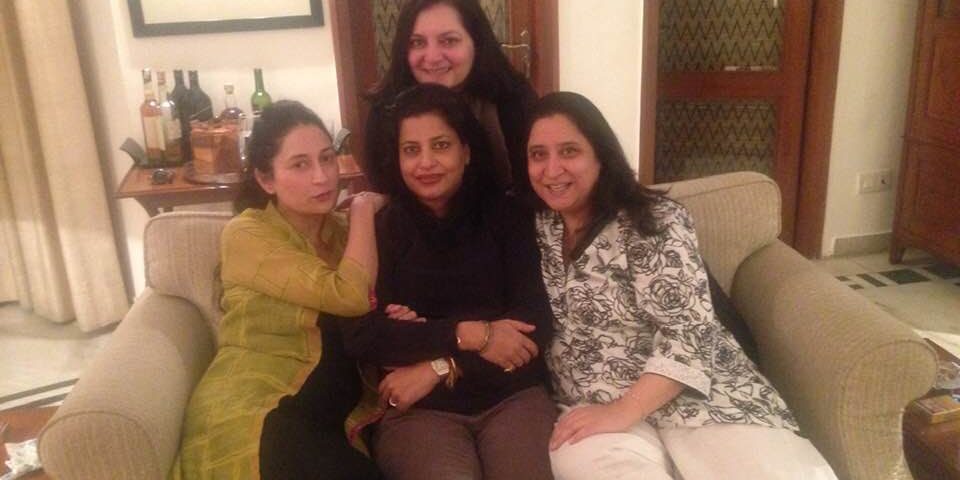 In the summer of 1980, when I joined Modern School, I was taken under the wing of our 6th grade fashionista — our very own version of the Devil in Prada. I was new to Delhi and Rashmi helped me find friends. She generously introduced me to Aarti. But amidst our own budding friendship, Rashmi and Aarti were quibbling over a certain Hockey, who appeared from their conversations to be at the Olympic Games. They fought over who cared for Hockey more. You can imagine my surprise when the Hockey (Rohini) returned to India donning human form. It was the beginning of a lasting friendship, of now, nearly forty years.

At age 11, Rashmi knew everything about everything. She taught us the facts of life. She taught us about fashion, about the perfect hairstyle (which was a comb clip put on the left side parting of one’s hair). She taught that a fashionable walk required the two feet to be slightly inwardly turned which help your behind sway. Most memorably, she taught that swinging parties had very literal swings. We learned it all with wide eyed fascination. Rashmi’s birthday parties were equally fascinating. On her 11th birthday, we were put in a dark room and shown Jadu Tona (the Hindi remake of The Exorcist). Rashoo had a delighted grin — clearly she had had a good time. The rest of us? Let’s just say – it was a never-to-be-forgotten hair-raising experience!

In the years that followed, Geeta auntie and Rashmi moved into 7, Barakhamba Road. And with them, so did we. After school, almost every day was spent in that expansive home. Geeta auntie fed us diligently, and tried very hard — without success — to get us to behave, be good and study. Whenever it got to be too much for her, we’d get thrown out of the house, which I must confess, in all honesty, was always Hockey’s fault. But God was always kind — one of the 100 entrance doors to the house was always miraculously open, and Hockey would invariably find us a way to sneak back into the house under the watchful eyes of auntie Geeta, who would always act surprised finding us back in the house.

Growing up with Rashmi meant endless drama. She would break into a dance, à la Praveen Babi, on ‘javane janeman’ without the slightest provocation and like no one was watching. At a time when half the girls in our class were in love with Kumar Gaurav and the other half with Sanjay Dutt, Rashmi received love letters from the latter, professing his undying love for her alone. Life came to a crashing end for all of us! Then Aarti with her razor-sharp detective skills discovered the likeness of Sanjay Dutt and Rashmi’s handwritings. But it was the spelling mistakes that gave it all away.

While Aarti and I, remained in quiet fascination of Rashmi, her true and lifelong partner-in-crime was Hockey. They had a lifelong commitment to be together, which even included joint visits to the loo. But they also pledged to do equally well in school. But then, the grade 7 maths result came. It was the story of the ultimate betrayal. Hockey had a princely 6 on 100, but Rashmi had 15. Hell hath no fury… and boy, could they land the punches. Theirs was an inexplicable, unique and truly loving bond. Aarti and I know of Hockey’s silent and unsaid loss.

But it was Hockey’s younger sister Chhoti (Yamini), who was separated from Rashmi at birth. Together they named everything and everyone. Your James has gone, Chots. Rashmi made us part of her life and family: we got to know Mona Maasi, her fashion idol; Atul Mamu, who was more a friend than an uncle and who always kept us in peels of laughter; her little brother, Rahul, whom she was so proud of. Her cousins Vivan, Mishi, Milena, Priya, Yana and Vidur, all of whom she dearly loved.

We grew up together — endless hours of senseless laughter, fighting over nonsense every single day, to date. We saw each other through boyfriends and heartbreaks. We stood together in times of happiness and tragedy. Our most precious memories remain our girls nights — jus the four of us. And that is never again to be. Most people who knew Rashmi perhaps will remember her for her forthright, “say it like it is” attitude. She was someone who not only lived by her own rules, but also made them for others and made sure that they abided by them.

But to Rashmi, there was a lot more. She was determined, talented, generous to a fault; and, truth be told, selfless in her giving. She was an avid reader, albeit of romance. And then one day, in 1994, her knight in shining armour did arrive. Two years later, she and Sanjay walked down the aisle. She had a commitment and a conviction to her marriage like no one else I know. She loved her Sonu. She wanted that only death will do them apart. True to Rashmi’s style, we bid her a final goodbye on her wedding anniversary.

We watched with silent admiration, the way she took to her graceful mother-in-law. In Sandhya and Vineeta, she found the sisters she always desired. Rashmi loved their children and ours alike, insisting she be called ‘big mummy’. Rush always had taste and never let anyone forget it. She kept an impeccable home. She had great organisation skills, which she inherited from her mother.

She also had a die-hard will. She was determined to have a child and worked tirelessly at it. In 1999, Rashmi and I were both blessed with pregnancies. We both had put on a ton of weight — so much so that our legs and hands were barely visible. But we rolled around town happily shopping, visiting doctors, getting our scans done. Yana’s arrival brought a completeness to her life. A fully hands-on mother and the results are there for everyone to see, in the beautiful, intelligent and well-turned out young woman Yana is. She is a wonderful mix of her parents. In her I see glimpses of Rashmi, a forever looking glass to my friend.

Once Yana was in her teens, Rashmi took to art with devoted passion, leaving us all a part of that love with memories etched in the colour of her craft. Never one to stand on formality, Rashmi had a close-knit group of friends. If she called you her friend, she made sure you accepted her friendship on her terms. If you complied, great. But if you didn’t, let’s just say she’d make you, by hook or by crook.

But at the end, her loss will be borne by the one who started it all — her mom. Auntie Geeta’s heart had only one beat, and that was Rashmi. We have the comfort of knowing that she is amid her beloved Nana & Nani, who meant the world to her. We also have the comfort of knowing she isn’t making it easy for God and we know she won’t let him rest, till her mother, her daughter and husband find their peace and a way to live without her.

As we say goodbye, I hear her say — give me the send off I deserve.

Our Father – An Officer and Gentlemen
February 23, 2019
Payal Chawla
Payal Chawla is founder of JUSCONTRACTUS, India's first and only all-women law firm.