Our Father – An Officer and Gentlemen 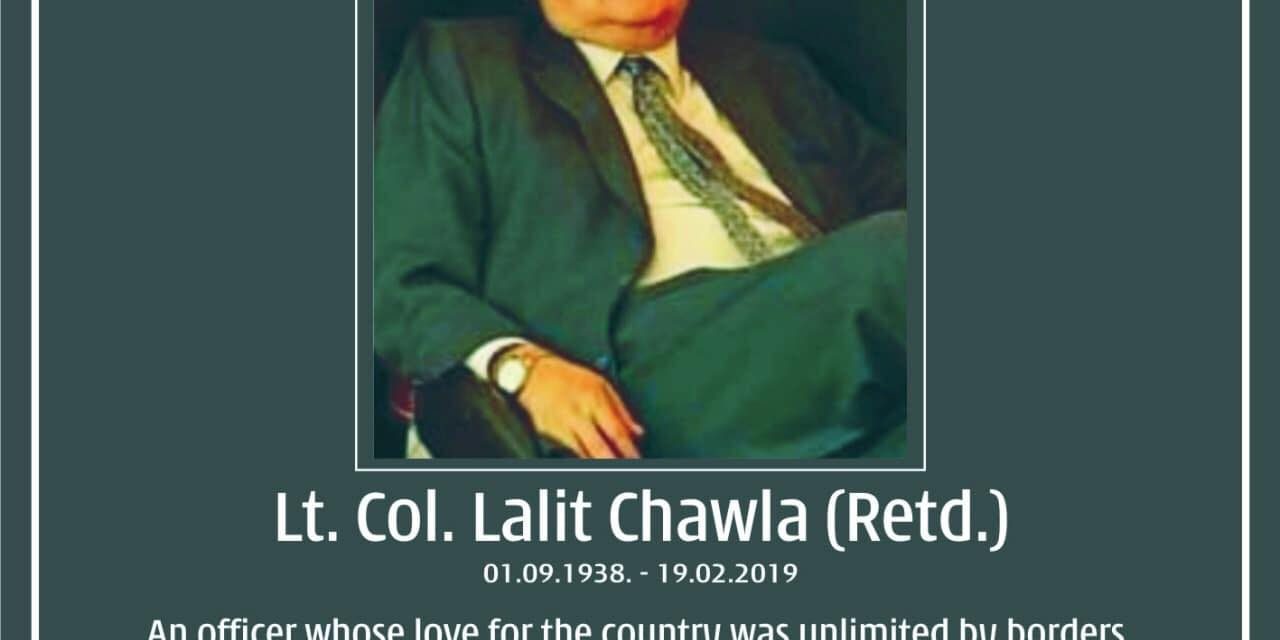 Some years ago, my father— true to his style — summoned me and said: “you, young lady, will deliver my eulogy.” Half in jest and partly trying to lighten the mood, I joked, “Daddy, – it’s because I write so well, na?”. “Well – it is not bad. You are given 7 on 10 marks”, pat came the reply. We both looked at each other and burst out laughing. I knew only too well, this was my father’s way of making sure there was equal participation of both my brother and me.

But today these words don’t belong only to me. I write on behalf of my elder brother, Gautam, and my son, Rayaan.

Our father was born in 1938, as ‘Lalit Chawla’. To some he is also affectionately known as ‘Polly’. He belonged to one of the few pre-partition families in Delhi. He grew up in Connaught Place, and was schooled at the Modern School.

It was at Modern that he found the love of his life …. Cricket! A passion that lasted a lifetime. He captained the school team in Cricket and was part of the school teams in gymnastics, swimming and horse riding. He was also an actor and good at studies. He was an all-rounder and often on stage to get medals. But that didn’t stop him from being hauled up before the entire assembly for stealing naarangis from the President’s Estate, during a school trip.

He was a thorough-bred Modernite. He loved the School, ensuring all of us studied there. After completing school, he did his intermediate from Banaras Hindu University. Soon thereafter he joined the Indian army as a Madras Sapper in the Corp of Engineers.

He was a proud officer and felt privileged to have had the opportunity to serve his country especially during its darkest hours during the 1965 and 1971 wars. He was in expert in the area of laying of mines, building bridges and roads. He was also extensively published in these areas. He was part of the team that built the highest airfield in the world at Chushul. During his years in the army, his affair with the gentleman’s game continued. He represented the Services Team in the Ranji Trophy.

Our father served in the 14 Engineer Regiment and commanded the 201 Engineer Regiment. The presence of their members at his cremation was deeply meaningful to our family and it would have been to him too.

In June of 1963, a young officer by the name of Ashok Varma, was undergoing a course at the College of Military Engineering in Pune. At the same time, Daddy was doing a degree course at CME. One look at our Dad, a passing thought danced behind the young officer’s eyes and he thought – ‘I wish my sister would marry him’. That young officer is none other than our second ‘mama’. Lo and behold, three years later, our parents were married, but at the behest of our paternal aunt. Our parent’s marriage was fated and it was the quintessential ‘match made in heaven’.

But, as in any great love story, there were obstacles. His first love letter to his bride to be – ‘Sulbha’ was addressed to a certain ‘Dearest Shukla’. I’m sure our father had much explaining to do. But Daddy being Daddy – decided to give mom an altogether different name. And that, was the beginning of the love story – “When Polly named Sally’.

Together our parents built a perfect home. We grew up amid much happiness. For our parents, just that, has always been enough. Growing up, Daddy was strict. But his jovial nature coupled with his absent-mindedness kept us in peels of laughter. And there were so very many stories over the years – him taking the train to the wrong destination, arriving for dinner on the wrong dates, leaving his briefcase outside the house – while we hunted for it inside.

But the most prized story of all is of a night our parents had gone dancing. After a night of revelry, Daddy took off on his Lambretta scooter, with his beloved in tow. Or so he thought. In reality, mom stood behind waving and screaming for his attention. In his version of events, he began to worry when there was no chatter bothering him. He checked behind, only to find her missing. His instant thought was, she had fallen off and so he turned around. Fourteen kilometers later, he found her waiting, back at the Venue. He breathed a sigh of relief, oblivious, to what she was quietly plotting, when there were fewer witnesses.

But seriously, she knew then and as she correctly believed a week ago, that no matter what – “he will be back”. And her confidence was not misplaced. Daddy had beaten Death so many times in his 80 years. As a young boy, he survived the then-incurable nephritis. While at the Indian Military Academy, while playing polo, he fell off a horse, only to have the horse fall on him. He got away with a few broken bones and a bruised ego.

Daddy narrowly avoided a collision between his jeep and a landing aircraft in the airfield at Leh. During the 1971 War, heavy bombings began at the Srinagar airfield. Everyone ran for cover in the surrounding trenches. He was turned away from one of the trenches, where he sought shelter, due to overcrowding. He had barely reached a safe distance, when there was a loud explosion. In a rare occurrence, a bomb fell directly into the trench he had initially approached, killing everyone in it, instantly.

In 1981, he was undertaking a reconnaissance mission in Assam with his unit atop a mountain. While giving orders to his men, he suddenly disappeared mid-sentence. All hell broke loose – where had Col. Chawla suddenly disappeared? As the unit members furiously looked around, they found him hanging by a tree, growing horizontally out of the mountain, pondering the drop of a few thousand feet.

In the early hours of 18th of February, 2019, when we took Daddy to the hospital, his heart stopped. But he denied Death one last time. He came back to say his goodbyes, and then left, on his own terms, in his own time. We also remain so thankful that we were able to spend his last day together at home, like it always was.

We are grateful to Dr Vivek Nangia and his team for giving us that extra time with our father, and for taking such good care of him in his final moments.

Our father had an indomitable spirit. He taught us that nothing was impossible, to always aspire for the skies, to never give up in the face of adversity and to always fight from the front. At the lowest point in my life, he never offered sops. He looked me straight in the eye and said – ‘You’re are a soldier, get up and get on with it’.

I leave you with the essence of my father’s life – Our mother was Daddy’s greatest love, his pillar of support and the person he respected the most. My son, Rayaan, was his greatest joy. I, his greatest weakness and my brother, Gautam, his greatest strength.